I love being here

I am so happy, it’s hard to describe.  One of the reasons is I feel like a kid again, the 20-year-old who came to Israel for a year when everyday was new and an adventure.  It’s a wonderful feeling. On top of that, I didn’t meet Chuck until the end of my year here (on July 5, 1969 to be exact), but this time I have him here for my entire visit- how great is that?!

This morning Chuck and I went out to breakfast at a cafe around the corner from our house, seated outside (which is great for people watching, but bad for the smoke you inhale- Israelis are notorious smokers and it’s O.K. to smoke at outdoor parts of cafes and restaurants).  After figuring out the menu (Did you know Bazilacum is basil?), we had a ball people watching.  (As in Europe, you can sit as long as you like in cafes, and you have to ask for a check.  Lovely.)

Israel is an incredibly diverse society.  In addition to the Jewish immigrants from the former Soviet Union, Ethiopia and South America (we hear Spanish on the street a lot) there are the native Arabs, the long-time Israelis from Yemen, Morocco, Iraq and Iran and now the migrant workers and refugees from Africa, the Philippines, and Thailand.  (Right next door to the cafe was Thai Touch, a massage parlor that looked on the up and up- someone was getting a foot massage outdoors..)  Among the Jews, you have the religious, the ultrareligous (very different garb distinguishes them visually), the fashionistas, the outrageous dressed or undressed (Chuck asked me if one woman walking by was actually wearing any legitimate clothes at all…), Hippies, students, and the Russian grandmother look with red hair and old fashioned clothes.  When I was a child, grandmothers had blue hair, but now Russian grandmothers seem to have red hair and I mean red.  What fun for inveterate people watchers like Chuck and me.

On the street right by the restaurant, was an ad for an American movie.  Can you tell what movie it is?

You’re right if you guessed The Oranges- a movie about our hometown!  What an orange peel-like object with a zipper has to do with that, I don’t know.

We also saw a strange looking flatbed tow truck stopped at the light in front of us.  I realized what made it strange- the lift apparatus was on the side.  Why?  My clever husband Chuck figured out it’s because in Tel Aviv, where the parking is so scarce that cars park extremely close to one another, the only way to get a car towed out is sideways.  Israelis are champion parallel parkers- I watch them in amazement as they zip right into spaces I wouldn’t even consider. Here’s the loaded tow truck with the side lifter. (Lior the vehicle maven will like seeing this picture.) 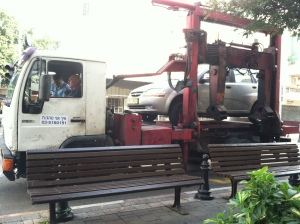 When Chuck took off for an appointment with a doctor who runs a hospital in the suburbs, I took the opportunity to wander around the neighborhood again.  Since I had postcards to mail, I found a post office to buy stamps.  What an experience!  It was the most sophisticated post office I’d ever seen. When I walked in, I thought I was in a clinic and had made a mistake because there were rows of people just sitting there and waiting patiently. (That’s very un-Israeli.) Then I heard a computer voice call out a number and someone got up.  So I asked someone where to get a number and he pointed to an elaborate kiosk where you have to choose what you want to do (mail a package domestically, mail one abroad, general business) and then each category has a different number series.  I got number 91, and although they were on 75, my wait was only about 5 minutes.  But, I observed that if someone didn’t immediately rise when a number was called, the computer voice went on to the next number.  How did the voice know if someone had gotten up?!  (O.K., one of the clerks must have been operating the system, but it felt like the voice was in charge.) When number 90 was called, I got ready and jumped up when they called 91.  After I got my stamps, I moved away and got ready to lick a stamp to put on a postcard.  The clerk who had helped me motioned to me to come back and she said (in Hebrew, the whole transaction was in Hebrew thank goodness), “That tastes awful.  Use this.”  and she took out a stamp-wetting pad for me.  How nice!  Would a clerk in a US Post Office ever do that?

On my walk home, I passed a Pilates Studio and that made me feel  at home. (I’ve been a Pilates devotee for 2 years.) Here’s the sign for Studio Tamar for Pilates. (I too can operate a camera, just not as artfully as Chuck can.)

Not that I think I need my usual Pilates workout- walking miles everyday and climbing our stairs 2-3 times a day is more than enough exercise right now! The neighborhood is full of hair salons and manicure places (Is it so all over the world, or does it just seem like it?) and once I have “my” places to “to do a fan” (literal translation for getting hair blown dry) and get a manicure, I’ll really feel at home.

Do you sense a theme here?  Israel always feels like home to me in both profound and simple ways and Chuck feels the same way.  At dinner last night we speculated about what our lives might be like if we had moved here (made aliyah as it’s called) 40 years ago when we seriously considered it.  It’s impossible to know, but fascinating to think about.  Our landlord stopped by last night.  He’s a 50 year old Canadian who made aliyah with his family 5 years ago, although his maternal grandparents came to Palestine at the beginning of the 20th century from Poland and his grandfather built and owned this whole building.  He said, “Why not make aliyah now?  It’s a great place to retire.”  I said I could never leave my children and grandchildren and parents and he said,”They’ll follow, don’t worry.”  For sure I know at least one who is game, but other than Rachel (surprise, surprise), I’m not so sure there would be any takers.  Oh well, we’ll just have to keep visiting.  Rachel suggested we consider buying a second home here- not exactly as convenient as the Berkshires, but so much more exotic!   Needless to say, it wouldn’t be an apartment in Tel Aviv given the prices I wrote about yesterday.  But otherwise, who knows?!  Stranger things have happened and in any case, I can dream.

3 thoughts on “I love being here”